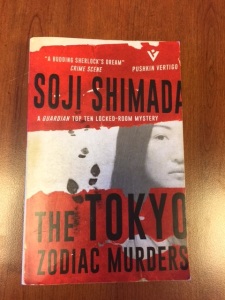 I’ve now read several Japanese mysteries and this was by far the most enjoyable. While there is a sort of codicil that explains the psychology of the murders, the point of the novel is that it is about figuring the mechanics of the mystery. The mystery itself is a locked room, forty year old cold case, which it difficult to interview any of the people involved, which turned out to be the point. Everything you needed was right in front of you early on. As you might guess from the title, the murder itself was somewhat astrology based and obviously inspired by the Zodiac killings in San Francisco, but the book never references those cases. I should admit that I did not figure out the mystery myself until it was revealed by the protagonist.