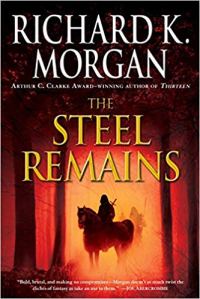 Written by the author of Altered Carbon (which I still haven’t read), The Steel Remains is a sort of grimdark fantasy (I hate that term) which partakes of some of the earthier moments of George R.R. Martin’s as yet unfinished septology (is that the word?) but more of the granddaddy (I would say), Glen Cook and his Black Company. Indeed, the three main protagonists would feel right at home in that titular company.

It’s all very good and exciting. The world is well crafted – it’s not unique, but Morgan is good at introducing the world without laying on tons of exposition. There is a sort steampunk overlay, with an alien race that uses barely understood technology that, as Arthur C. Clarke noted, looks very like magic. Of the three protagonists, one is clearly the focus and he’s gay, which is nice to see in terms of diversity (another is from a non-human sort of race that happen to be black).

He brings all three point of view characters (who also all previously knew each other) together at the very end in a way that just feels entirely too forced; a poorly established deus ex machina. that left me with a bad taste in my mouth.