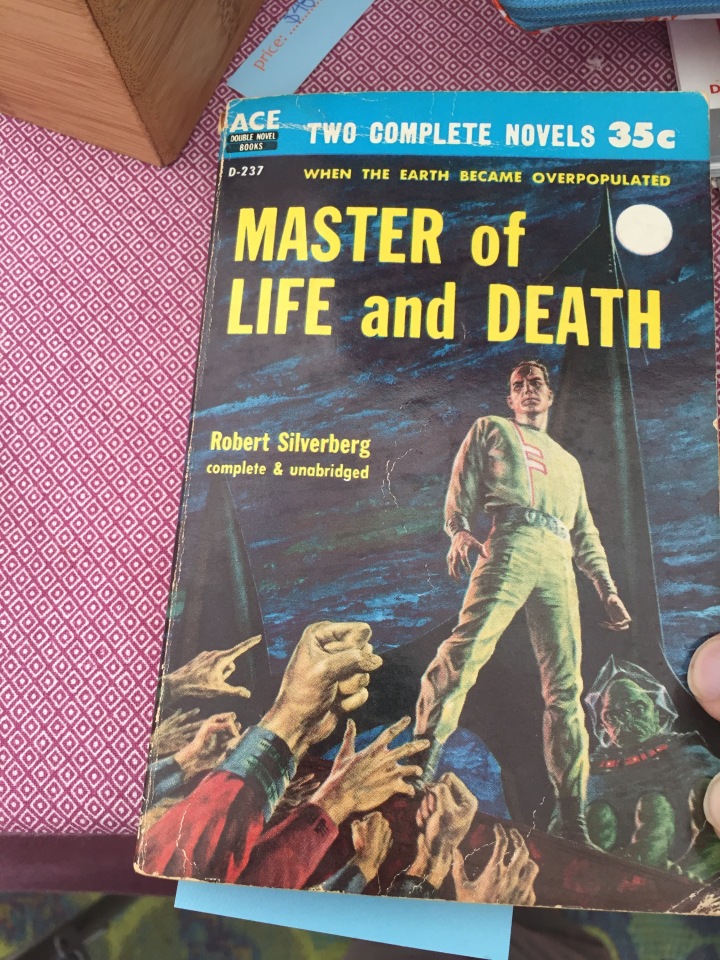 This was one half of an Ace Double (the other being The Secret Visitors by James White).

I read a novel by Silverberg many years ago… a sort of combination of science fiction and old school planetary romance called Lord Valentine’s Castle. It was part of a series and never read anymore. I remember both thinking the book was good, but not great, yet also having the contradictory feeling of sadness that comes after finishing a good book and knowing that one can never read it for the first time again.

I didn’t get that feeling from Master of Life and Death, but it was still a fast, bracing read. It’s science fiction, with some faster than light travel, aliens and a global institution responsible for both euthanasia and resettlement as a means to deal with overpopulation, but really, it’s more thriller, with a touch of conspiracy style espionage. The ‘hero’ is a fellow named Roy Walton and he quickly becomes the head of said global institution. I put ‘hero’ in scare quotes because, while he clearly means well, virtually every action he takes is morally dubious. Towards the end, his efforts to escape the tightening noose become so incredibly unethical that it becomes cringe inducing. Roy is being blackmailed by his brother Fred, while trying to preserve his job and also more or less carry out his duties and save humanity. Honestly, the science fiction is just an overlay on a thriller.

But like I said, it’s still pretty gripping and ratchets up the tension nicely. You’ll probably never encounter this book, but if you do and if early silver age scifi is your bag, then this book should be your brand new bag.

One thought on “‘Master Of Life And Death’ By Robert Silverberg”