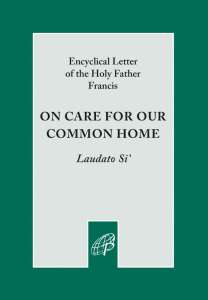 Rather than give thoughts on it (other than – wow! a powerful statement for environmental and economic justice), I’m just going to copy out a bunch of passages that struck me.

Because of us, thousands of species will no longer give glory to God by their very existence, nor convey their message. We have no such right. (33)

“If we scan the regions of our planet, we immediately see that humanity has disappointed God’s expectations [John Paul II] (61)

Respect must also be shown for the various cultural riches of different peoples, their art and poetry, their interior life and spirituality. (63)

They suggest that human life is grounded in three fundamental and closely intertwined relationships: with God, with our neighbor, and with the earth itself. According to the Bible, these three vital relationships has been broken, both outwardly and within us. This rupture is sin. (66)

The Spirit of life dwells in every living creature and call us to enter into relationship with him. Discovering this presence leads up to cultivate the “ecological virtues.” (88)

For believers, this becomes a question of fidelity to the Creator, since God created the world for everyone. Hence every ecological approach needs to incorporate a social perspective which takes into account the fundamental rights of the poor and underprivileged. (93)

Underlying every form of work is a concept of the relationship which we can and must have with what is other than ourselves. (125)

To claim economic freedom while real conditions bar many people from access to it, and while possibilities for employment continue to shrink, is to practice a doublespeak with brings politics into disrepute. (129)

We know that technology based on the use of highly polluting fossil fuels – especially coal, but also oil and, to a lesser degree, gas – need to be progressively replaced without delay. (164)

Saving banks at any cost, making the public pay the price, foregoing a firm commitment to reviewing and reforming the entire system, only reaffirms the absolute power of the financial system, a power which has no future and will only give rise to new crises after slow, costly, and only apparent recovery. (189)

The environment is one of those goods that cannot be adequately safeguarded or promoted by market forces. (190)

If we reason only within the confines of [empirical science], little room would be left for aesthetic sensibility, poetry, or even reason’s ability to grasp the ultimate meaning and purpose of things. (199)

It must be said that some committed and prayerful Christians, with the excuse of realism and pragmatism, tend to ridicule expressions of concern for the environment. (217)

Mary, the Mother who cared for Jesus, now cares with maternal affection and pain for this wounded world. Just as her pierced heart mourned the death of Jesus, so now she grieves for the sufferings of the crucified poor and for the creatures of this world laid waste by human power. (241)