In an otherwise only marginally interesting answer to the question of whether the United States should renounce its treaties with France until it had established a government. While it’s not clear who needs to establish a government, because both countries had some ups and downs, the date of 1793 suggests it was France that needed to sort itself out.

In terms of practical politics, of course, America needed to adhere to its earlier treaties, barring some truly exceptional occurrence (the French Revolution, arguably, would qualify).

Here is what caught my eye:

The law of nations, by which this question is to be determined, is composed of three branches. 1. The moral law of our nature. 2. The usages of nations. 3. Their special conventions.

It’s an interesting bit of morality, couched in enlightenment terminology (Lockean?), which seems out of place in the Jefferson I have been reading. 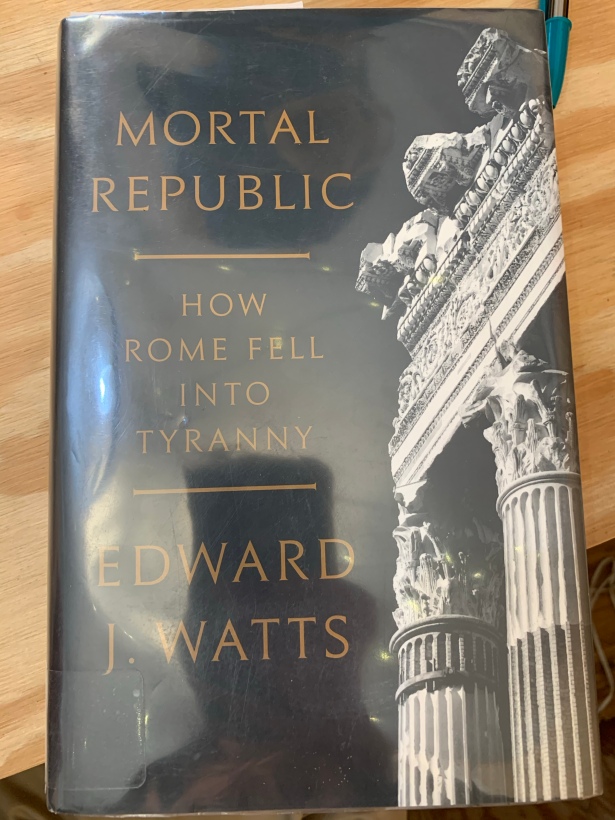 I was forced to confront that I did not know as much Roman history as I assumed. Watts documents the breakdowns in republican norms that ultimately led to Augustus, nee Octavian, Caesar.

He is also, one assumes, drawing a bright line between Roman acceptance of the collapse of norms and our current crisis of democracy. Admirable, if maybe a bit tacked on. History does not exist to fit our notions.

The earlier crises are better reading than the final crisis, because I was left with a sense of knowing figures like Pompey the Great, Sulla, and Tiberius Gracchus. But vital, late players like Marc Antony and Octavian remain opaque in Mortal Republic.

For you Ciceronians, this quote might amuse or gall:

Cicero was an equestrian with a gift for long-wonder, self-congratulatory orations that nevertheless often proved extremely persuasive.

Cicero does not come out of Mortal Republic with much dignity intact.

The only three included (I don’t know if there were more, but I must assume so) are of Washington, Franklin, and Wythe. Franklin here suit my own preconceived notion of him as a sort of wise clown, deflecting conflict with humor and contributing through a sort of peacemaking between parties. One wonders his feelings on the underlying subject of the Washington sketch, which is, like war, politics by other means: Republicanism vs Federalism.

You can see Jefferson’s regular topics and conceits clearly here. A chapter on religion is mainly about the religious freedom he so assiduously (and successfully; he wrote the statute) championed in Virginia. On education, it reflect the inadequacy of both the physical and curricular structure of William & Mary, then the state’s only college; arguments no doubt in support of his quest to establish the University of Virginia at the base of his mountain. You see Jefferson the amateur scientist (and a fascinating digression into some amateur archaeology that he undertook on a Native American burial mound.

On manufacturing, his disdain for large scale production is clear (despite the fact that very nearly his only profitable venture was a nail factory he built on his lands). It feels a little naive, to disdain creating finished goods here, beyond basic items, but it fits with his pastoral/agricultural republicanism. Like Socrates, he seems to think smaller polities are better.

On race… the less said the better. He was at a point where his views were evolving and not for the better. He is open to the idea that the native peoples could achieve a cultural status close to whites, but that “generosity” only reminds the modern reader of the anti-black racism running through his brain.

Takeaway quote (from the religion section):

It is error alone which needs the support of government. Truth can stand by itself.

And you know what? In this day, his vigorous, anthropological critique of religious oppression may seem commonsensical today, in the eighteenth century it was far more daring and outre.

Doesn’t make up for the racism, though.

My reaction to the President’s abandonment of our Kurdish allies is making me sympathetic to the late Christopher Hitchens’ seeming adoption of neoconservative foreign policy positions. It is even (gasp) making me less contemptuous of Bernard-Henri Levy, affectionately (?) known as BHL.

The Orwellian interventionist strain of liberalism (and I mean Orwellian not in the sense of doublespeak, but in the sense of his international engagements) seems to have resurfaced with the cowardly actions of the President and while I cannot say that I am any less in disagreement with the invasion of Iraq, I can honestly ask myself, is this how Hitchens saw things in the mid 2000s, the way so many of us see the President’s capitulation to Turkey?

It is perhaps because of also reading Vidal’s essays that I checked this out from the library. A powerful and important writer who is likely to still be forgotten. Will my child grow up to read Hitchens?

As the current events he covered recede (into the dark fields of the Republic?), there are still gems that will be worth reading in a quarter century, especially his ruminations on early US history and on his seeming inspiration, Thomas Paine.

Also, as much as one might love listening to his voice, it is easier to forgive and understand his political positions when reading his actual words (I should add that I have only read one of his books that weren’t collected essays). He is, at his best (which he is not always at), at wonderful writer.