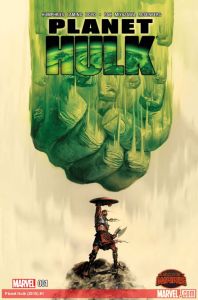 Technically, I’m reading Planet Hulk: Secret Wars. I don’t really know much about Secret Wars, except that everything has changed – Dr. Doom is god of the world, there is a country of Hulks (or should that be lowercase – ‘hulks’) with, apparently, a red skinned leader who looks as much like Hellboy as he does Red Hulk, as well a paramilitary police force of multi-ethnic, multi-gendered Thors (or thors).

I got it for one reason, and that is that hero is a gladiator version of Captain America who has Devil Dinosaur as his sidekick.

Yes, that’s right: I will read anything with Devil Dinosaur.

Devil is drawn respectfully. He is a fearsome predator; powerful, but always trying to be on the side of good.

Unfortunately, he’s also kind of denatured. He’s not a unique creature with his own history, but just an old, semi-forgotten comic book character brought back from the waning days of the silver age to be the sidekick. Which is sad. And you can see how important Jack Kirby’s kinetic style was to Devil’s action sequences, because those long, progressive panels are absent, leaving Devil just a big, pet monster, albeit as fierce one.

Also, Captain America with long, blonde hair and a battle axe to go with his shield, while a cool idea (Captain America as the world’s greatest gladiator, using his super soldier serum strength and reflexes and tactical nous [and twenty foot tall man-eating dinosaur] to defeat all comers!), in practice, it looks like Captain America doing some kind of He-Man cosplay.

One thought on “Okay, So I’m Reading Comic Books Again”