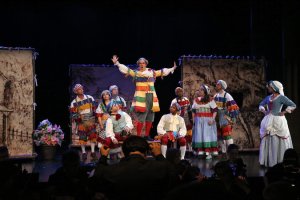 This is the third time I’ve seen a production by the Opera Lafayette, who specialize in eighteenth century French opera, but it was the first opera-comique I’ve seen by them.

A small cast (four singers, a ‘chorus,’ and a dancer) and minimal sets for a small, gem-like romantic comedy. Pascale Beaudin as the female lead, the country girl Denise, was absolutely darling. You wanted to take her home to meet mother. Her eventual beau, Andre, impressed me less, but his buffoonish romantic rival, a baritoned Thomas Dolié, was a great comic foil. The production was performed in the relatively intimate terrace theater (I have no idea how many stages there actually are in the Kennedy Center… but there are a lot).

I actually was not going to go, but I won free tickets from WETA, our local classical music station. The five dollars a month I donate has been more than paid back. I actually found out that I’d won through a suspicious sounding email (apparently, the original winner never responded, so I was next in line – I was told to reply back quickly, because they needed to get the name to will call) and right up until I they handed me the tickets, I had an itch at the back of my head that this was all a phishing scam. But it wasn’t and it was great d–n day.