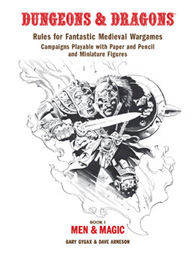 So, today is being celebrated as the fortieth birthday of Dungeons & Dragons. It’s a bit of an approximation because the nature of the game is that its creation was a process. But, what the heck. Happy birthday.

In honor of this momentous day, I am going to subject anyone who bothers to read this to a lengthy description of the campaign I have been running. Suck it, reader. Or don’t. Click away. That’s what free will is all about.

A halfling thief named Finian, a human warrior named Regdar, and a human skald named Teague were serving in the military of a small, peaceful, multi-cultural kingdom that called itself the Sunward Empire. The king is a gnome and is the spiritual representation of the sun god. His consort is a human and is chief priestess of the wind goddess. Primarily supporting itself on a combination of trade between the eastern and western continents of Loe and Goa, respectively, as well as some mining and tropical agriculture.

The party is part of the small garrison of the Throughward Isle, which is the easternmost island and also has the largest iron mine in the Sunward Empire. After a quick introductory fight between the characters and some giant crabs in the shallows, there was an alarm sounded and the party ran to the main docks.

A group of well organized, well drilled human soldiers disembark in quick order. After a few minutes (’rounds’ in D&D parlance), it became clear that the small garrison would soon be overwhelmed and the garrison commander sent them to escort one of the island’s leading citizens and part of its ruling council to go to the fortified island/city of Hazakis to warn the emperor. They were lead to the entrance to the mines by a gnome named Peleg (who would remain with the party for a long time, before Finian cut off his scrotum and left him to bleed out on the street, but that’s another story).

In the mines, they are ambushed by some humanoid frogs called bullywugs and first see a symbol consisting of three vertical, wavy lines (which would reoccur throughout the campaign).

They emerged on the other side of the island and took a boat to the see the emperor.