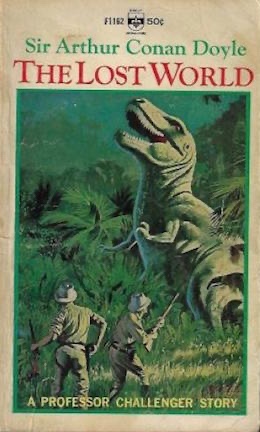 Arthur Conan Doyle’s yarn falls between the science fantasy of Edgar Rice Burroughs and the didacticism of Jules Verne, which is to say, it is an adventure about dinosaurs in the jungles of South America that makes some stabs at following the best science known at the time.

I remember reading this a kid in the kitchen of my Uncle Buddy and Aunt Anna’s house in Atlanta, especially the bit where the protagonist names the lake in the dinosaur-filled plateau, Lake Gladys, after the chilly, would-be fiancée who inspired him (and who subsequently married a clerk while the protagonist was doing feats of derring-do; suffice to say that Doyle has a bit of misogynist streak, not unlike his most famous creation).

What can you say about a book like this? That it’s a ripping good tale. That the racism… could have been worse? That the genocidal attack on a tribe of prehumans feels icky?

You can definitely say that it needed more dinosaurs (a truth which can also be applied to Verne’s Journey to the Center of the Earth).

I had a good time reading it though, all in all. From my father, I inherited a love of British adventure stories and from my childhood a love of dinosaurs. So, something for everyone, I suppose.