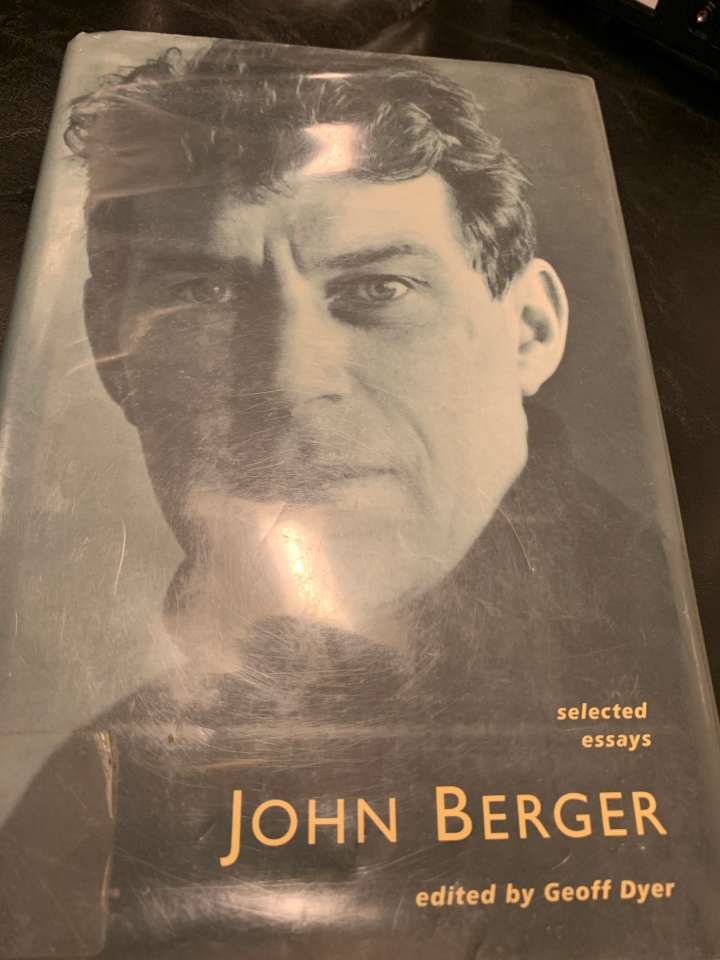 A wide ranging selection and a reminder that a very good writer and an insightful thinker can also write a great deal of crap in their lifetime.

I had heard such glowing things about his art criticism and about his BBC series, The Art of Seeing, that I was excited to buckle and read Berger, but I almost gave up about 1/20th of my way through. A slimmer volume might have done me better.

He almost but not quite seems to have read and grasped history (especially intellectual history) enough to support his bigger theses. When identifying romanticism, it’s an interesting idea to place it between Rousseau’s Social Contract and Marx’s Capital, but he seems to just kind of fade off… rather than properly support it.

I can understand what he brought to the table, bursting onto the scene. A learned, perceptive eye, but not an academic one. His Marxism was present (he is also a sort of elder statesman figure to soixante-huitards), but not intrusive, adding much needed context to some artists (his essay on L.S. Lowry being an obvious example).

The thing is, I don’t need what he brings. Or maybe I do, but I’m too proud and too dense to see it. I’m not saying that I could do better (I couldn’t), but that I think I have enough that his unique perspective isn’t useful. Arguably, possibly because he opened the doors, it is already sufficiently understood now.

One item stood out for entirely the wrong reasons and for reasons for which is (almost) entirely blameless. He writes about the Museum, a capital M institution of implied fuddyduddiness. Berger writes as a sort Angry Young Man figure, but when you start to read it, in the current environment, your mind automatically drifts to question of race, gender, cultural appropriation, and colonial pasts, which, of course, an art critic from the mid-sixties is not so much interested in. Speaking on race, gender, and colonialism, his analysis of so-called primitive art is very… primitive. Smacks of a kind of orientalism.

Also, he really overused the word peasant. At a certain point, it kept reminding me of the eurocentrism of his whole project (because the peasant is always, clearly, a certain European figure; he may think it he means a global class, but it is also clear that the image in his head is European).

But he does know a lot more about art and artists than I do and I, we, must always be grateful for the opportunity to learn. For myself, he brought up dozens of artists and works (much of the book is devoted to relatively short essays about particular artists or artworks) that I had never heard of (Frans Hals) or else had never given much thought to (Pierre Bonnard; I like one of his paintings, but had never thought much about his context).

And he will also come up with a little throw away line that just hits you as being too perfect, like calling Marshall McLuhan a ‘manic exaggerator’ or saying this about Picasso:

Above all Picasso suffers from being taken too seriously.

Finally, I have to love him for, when he wants to illustrate historical atrocities and complicities, turning to poets and poetry to express has happened.