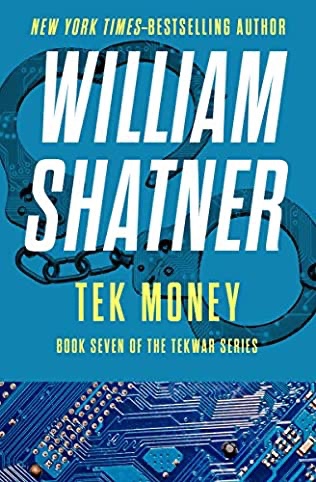 Can you believe this is the seventh book ‘written’ by William Shatner? Though he comes closer than ever to admitting Ron Goulart as the author of these novels in his acknowledgements.

Like its immediate predecessor, Tek Money has an international flavor to it. This time, they go to Spain which is kind of a third world country in the future, apparently. There is a democratically elected government, except that maybe it’s bad. And an insurgency that’s allied with the sort of American intelligence agencies that thought bombing Laos would be good for everyone and also with drug cartels, except maybe they’re not and maybe they’re not so bad. I guess.

The ostensible hero, Jake Cardigan, fades into the background a bit relative to his partner Sid Gomez, whose characterization always flirts dangerously close to ethnic caricature, without ever quite going all the way. It’s like a Heideggerian being-approaching-racism. But, despite those concerns, he is actually becoming more interesting than his caucasian buddy. Also, whoever is writing these novels needs to stop putting in subplots involving Jake’s teenage son, Dan and his partner in crime/occasional girlfriend, Molly. There was a confusing and pointless one going in and out during this book, that both managed never to make sense and to not go anywhere. Best of both worlds.