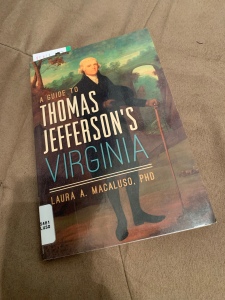 As it turns out, it’s the sort of glossy covered, trade paperback you would find (and probably do) at the gift shops of Colonial Williamsburg, Monticello, and elsewhere across Virginia (in fact, it helpfully provides the website addresses to such places, where mentioned). Not, perhaps, providing the sort of new information that I am looking for, having already read I don’t even remember anymore how many books and writings by and about Jefferson over the last two years or so.

But, to give it its due, a nice guide to places of importance to Jefferson. And going beyond Monticello to include places like the house of his legal mentor, George Wythe, and his retreat at Poplar Forest (for when the visitors at Monticello got to be too much). And a shallow, but still useful primer on architecture. I learned more about Andrea Palladio, from whom we get the term Palladian, including the title of his most famous book, which Jefferson apparently read and much enjoyed, I quattro libri dell’architettura (The Four Books of Architecture). I also did not know that Jefferson designed a number of Virginia courthouses and also the houses of some of his friends.