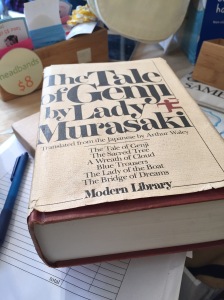 I picked up Genji again after a long absence and, after some initial struggles getting back up to speed (it’s got a huge cast of characters and is episodic, so it’s both easy to lost and easy to make yourself push through to the next ‘episode’ or event), I was quickly re-immersed in that world.

While Genji himself has mellowed a little with age (he ends this third book of the tale in his late thirties), it is getting easier to see him as the villain of his own story.

He is more or less running the country on behalf of the Emperor (who is, secretly, his son, having had an affair with his father’s concubine, which is not nearly the creepiest sexual encounter of his life so far), but honestly doesn’t seem to be paying that much attention to affairs of state. As usual, women take a great deal of his attention.

There was a long, running thread of finding the long lost daughter of a woman who Genji had loved, but whose lover was not the titular protagonist, but his friend and sometimes rival, To no Chujo.

A series of coincidences allow Genji’s servant to rescue her and bring her to his palace where he immediately reunites her with her father, To no Chujo. Just kidding. He tells everyone she’s his daughter and manages to both encourage suitable men to court her and also to try and sleep with her himself. He doesn’t succeed, but the moral center of the tale, his primary spouse, Murasaki, reminds him that before they became lovers, she was a young girl he was raising as a daughter.

The beautiful flow of the tale and the strangeness of the time and place (at least to a western reader) often lets the reader glide past these things, but every so often, you think… yucky.

As always, a reminder that modern sexual mores about pre- and extra-marital sex are pretty recent (the sort of adopted daughter’s husband is basically chosen by which one she lets sneak into her room and make love to her).

And some personal fantasy nostalgia for a time and place where people would communicate by poetry on an almost daily basis (most written communication takes the form of short poems, with more or less allusive meanings).