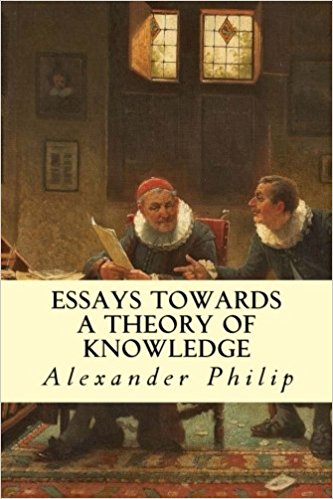 While a respected public intellectual in his day (the early twentieth century), he’s certainly not someone anyone would recognize today as being a top tier epistemologist, metaphysician, nor thinker. Which would probably come as a surprise to Mr. Philip, who clearly felt that he had hit upon some excellent truths, whose veracity was easy to see once he’d made his thinly supported assertions clear.

His overall theory of knowledge is covered in the first half of the book, Essays Towards a Theory of Knowledge, and it’s basis is a sort of dynamic understanding. He never questions that knowledge (as in, justified true belief; and yes, I know, there are other formulations, but neither Philip’s book nor this blog post are weighty enough to sustain a conversation around them) is possible. For him, the question is, how is it possible? He says that he dismisses sensation and experience, but really, he is dismissing a somewhat straw filled version of Locke. The basis on knowledge is mind acting acting through dynamism (usually, but not always, motion) on the world, rather than the world acting on a tabula rasa.

I don’t think that anyone would really buy his claims to be engaging in Science (with a capital ‘S’). And by the end of the book… actually, beginning around halfway through, he seems to have moved on to some popular (and sometimes debatable) science, which tends to degenerate into something that reads like a new age guide to ‘energy,’ such as I might have found at the now defunct Bodhi Tree Bookstore (which I loved! I miss you, Bodhi Tree, and your free green tea).

He quotes a lot of French, strangely, most of it by Diderot who, as even his biggest fans must surely admit, is not known for epistemologies). My French isn’t great and I wouldn’t entirely trust my rough translations, but it can be said that my French is better than my ancient Greek. Feel free to translate these things for me, Alex.

Oh, and I learned a new word: vident. It’s from the Latin, I believe, and the author uses it to refer to someone who can see (he uses a lot of examples involving blind people, because he sees their tactile access to the world as supporting his dynamic theory of knowledge).