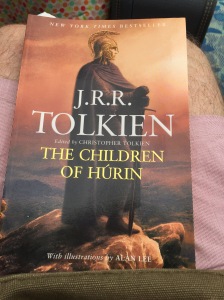 Lately, in honor of the 80th anniversary of The Hobbit, there have been some defenses of Tolkien’s works as more morally nuanced than they are given credit for.

It is this truth which makes The Children of Hurin so difficult to read. The book is mostly about Hurin’s son, Turin. A great warrior and a charismatic figure, he inspires great love from most of those he meets. As the reader, I kept waiting for his revelation. For him to grow up and stop being petulant, impetuous, pointlessly wrathful. It never happened.

A few other characters realized that, beneath his good intentions and ability to kill evil monsters, he was kind of a jerk.

And everything, felt in vain, in the end.

Stylistically, it is more like the Silmarillion than the Lord of the Rings or the Hobbit. It’s affect is less naturalistic and more in the style of northern European sagas (think Beowulf or Njal’s Saga).