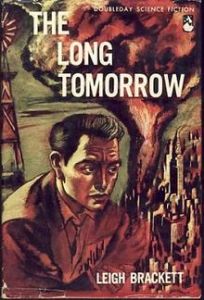 Leigh Brackett wrote heady, thinking person’s sci fi, pulpy space operas and planetary romances, and also worked on the script for The Empire Strikes Back. I’ve read a little of her pulp (one of her Eric John Stark novels/novellas – an homage to Burroughs’ Barsoom novels), but it’s more books like The Long Tomorrow that have made her important to the history of sci fi.

The Long Tomorrow is post apocalyptic, but more in a Canticle for Leibowtiz way than a Road Warrior way. The world is still around. She’s thought out some interesting implications (the new America is politically dominated by groups descended from Mennonites, because they were already reasonably self sufficient in the absence of much technology; and America still exists, but it’s a lot more low-tech).

The evolution of the main character, Len, is interesting. It’s not that he’s super smart, but he is a thinker. More, he can’t help thinking and can’t help taking his time when thinking, but then, in the end, acting on the implications of what he has figured out.

The ‘twist,’ if that’s what it is (and it just might be my interpretation) is that the secret colony of scientists may just be spinning their wheels and the answers may not exist. Which also might be the point of Len’s thinking.