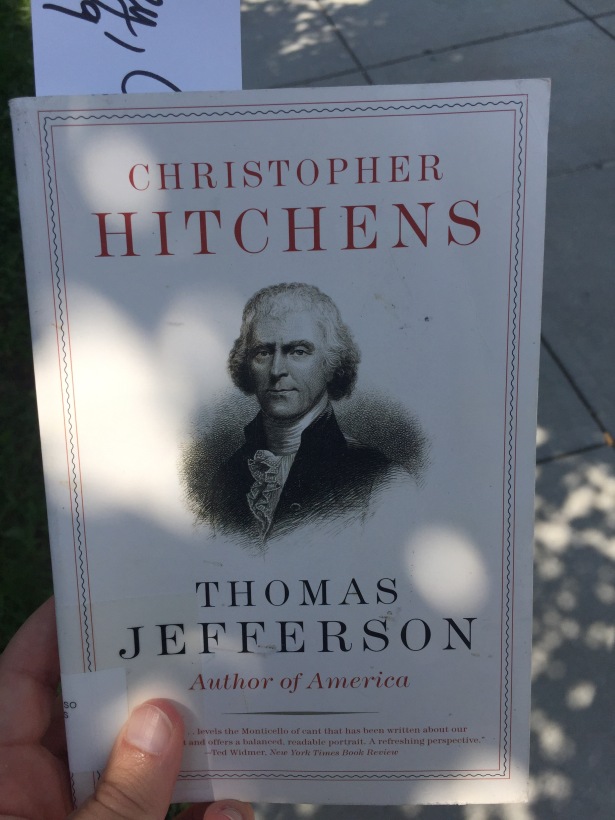 Having finished Hitchens’ brief biography of Jefferson, the final question must be: is this anything more than an adequate biography of our third president?

And I am not sure that it is.

The intellectual boldness semi-implied by the subtitle (though not too brave; it’s not heresy to give Jefferson a great deal of credit for the intellectual and ideological underpinnings of our country’s foundations and the particular term, ‘author,’ is nice reference to his prodigious output) is not really fulfilled.

Hitchens is an essayist, not a historian. And I didn’t read this hoping for a great biography of the man. I wanted to experience the author’s famed tics, obsessions, and witticisms, of which I got some, but less than I’d have liked.

But the good bits.

Constantly introducing Edmund Burke into the narrative and making me want to read some more by him.

Emphasis on Jefferson’s interventions in North Africa, i.e., against the so-called Barbary Pirates (about which I was only aware because I’d once watched the 1950 movie, Tripoli, starring Maureen O’Hara). Of course, in this, one wonders whether Hitchens saw those military adventures as being connected to our ‘adventures’ in Iraq and Afghanistan?