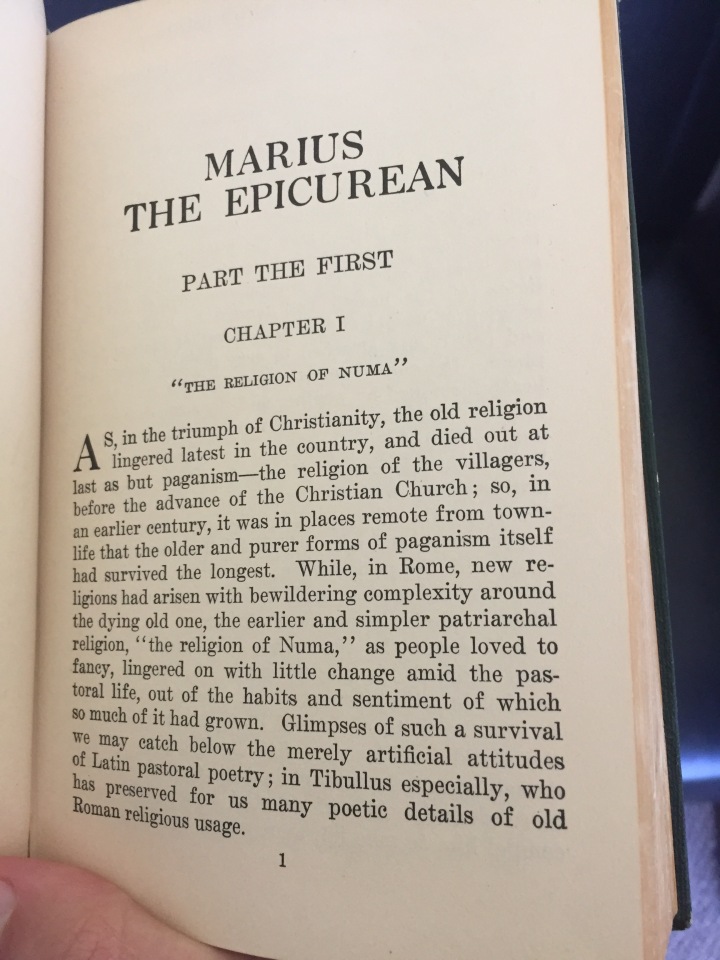 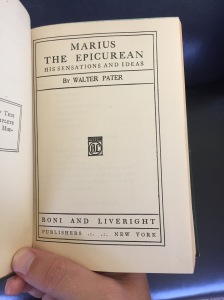 This is an old fashioned kind of book. Very much a certain kind of nineteenth and early twentieth century kind of book (this book was written in the early 1880s). A wordy philosophical novel.

It’s not a novel that illustrates or explicates a certain philosophy. You won’t learn much about Epicureanism (and really, Marius is never actually, so far as I can tell, a followed of Epicurus). But you will, if you’re willing, be able to drift back into a Rome of late antiquity (the Stoic philosopher-king Marcos Aurelius is emperor), but really, you’re in a European, upper class milieu of intellectuals.

The plot, insofar as there is one, is Marius, a devout young man, goes to school nearby (which schooling consists of learning history and philosophy) and then to Rome, where he is first deeply impressed by Stoicism, but slowly is impressed by a Christian family and possibly becomes a Christian at the end.

Marius the Epicurean is also an exercise in envy for the reader. What must it be like to have financial independence without much responsibility and to spend one’s time thinking about the meaning of life and what is good in life (which is not intended to be a Conan joke, but an acknowledgement of the primary question of Roman philosophy) and to read the best that minds have to offer and study at the foot of great thinkers. Again, all while not really having to worry about housing, food, healthcare, etc.

Finally, it is a slow read. Or should be. In truth, I finished the final third too quickly. My better half had noted how long I had been reading this book and I think that I felt a little sheepish about my slow pace and rushed a bit so that I could complete it while she was out of town.

One thought on “‘Marius The Epicurean’ By Walter Pater”