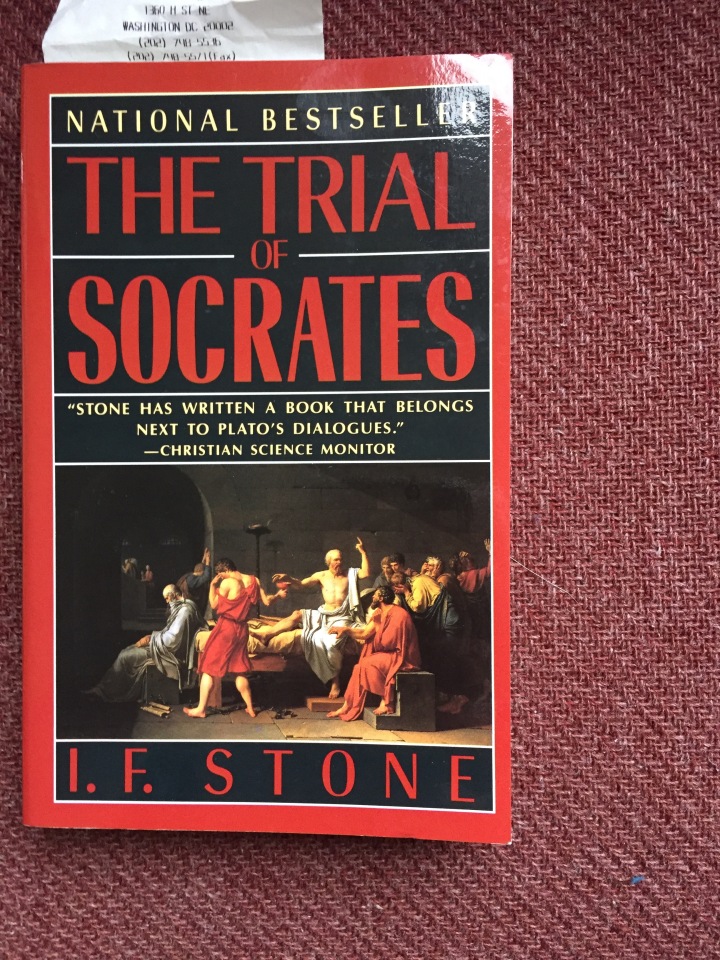 I’m always reading several books at a time. Sometimes, too many. They pile up beside the bed in the dozens (to the consternation of my better half).

But I like to vary my reading based on moods (though lately, they have all been linked by classical Greece and Rome). I have a copy of some works of Cicero nearby and I finished On Duties but can’t seem to get into On Friendship nor On Old Age, but they’re all in the same tome and I feel like I should just finish the physical book.

I just finished reading though Stone’s The Trial of Socrates (not in the least because it vocalizes some of my nagging complaints about the Socrates of the Platonic dialogues, namely, that he’s a bit of a flat track bully; it’s also got some wonderful sounding close reading of the original Greek texts; I saw wonderful sounding because I don’t read Ancient Greek and have, really, no idea if his translations and interpretations of individual words is better or worse than others). If I have one criticism, it’s that he closes weakly, by going into a discussion of the etymology of terms for ‘freedom of speech.’ Not that it’s not interesting, but like the ending of Smith’s Theory of Moral Sentiments, it brings the (for lack of a better term) ‘narrative’ momentum to a crashing halt.

I finished the second volume of the sci-fi/space opera quartet, The Hyperion Cantos (the names of this one is The Fall of Hyperion). It’s not nearly so pretentious as the word ‘cantos’ implies. I’d compare it to some of Samuel Delaney’s wild space operas, but less formally complex and also less lyrical (even though the reconstructed personality of John Keats is a major character in The Fall of Hyperion). Shouldn’t keep you away from these books, if you like good sci fi. It’s a well thought out, well realized universe with some excellent literary flourishes.

Sally Wen Mao’s Mad Honey Symposium lies beside my bed and the title would have drawn me in, even if the poetry weren’t excellent (which it is).