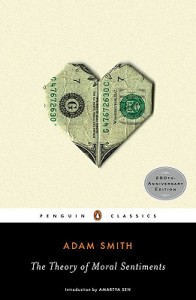 I read this book slowly, over the course of more than a year, which is too bad now, because, as I’m writing about it, I can’t remember as many details as I might like.

I remember a couple of things, like a section that seemed to suggest that, in the (hypothetical) absence of God, it is the state that matters, but that being the only significant talk of capital-G God in a work that generally, though never explicitly, developed an anthropological explanation for morality that required no divine edicts.

I remember thinking that his explanation for the natural sentiments that exist in the majority of people, combined with social norms, allow us to put ourselves in the place of others (it sounds like empathy, and it is, but also more than that) in order to develop socially enforced moral codes.

I also remember thinking that this was just a hop, skip, and a jump to John Rawls’ theory of justice (as described in his… A Theory of Justice).

And then… he suddenly spent the last thirty of forty pages discussion of the history of language, I got a little confused. At some points, he seemed to be making a point about language, for example the use of I and us and Romans to help people put themselves in the place of others and themselves within society. But mostly, I have no idea. It might have been cool near the beginning, but at the end, it was a total distraction and letdown. When a nice summing up would normally be called for, he went off onto a strange tangent. Oh well. Welcome to the world of belles lettres, I guess.

3 thoughts on “‘The Theory Of Moral Sentiments’ By Adam Smith”