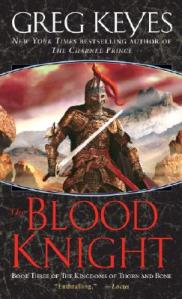 Let’s get this out of the way: the series is inexplicably compelling. It’s well written for genre fiction, but no one is going to be replacing their bust of Goethe with one of Keyes (nor even their bust of Asimov or Lovecraft, though the later’s horrific racism might inspire them to replace it with someone else [I would suggest the great queer African-American science fiction writer, Samuel Delany]). Which is all a way of saying I enjoyed.

But that’s not going to stop me from proceeding to criticize it.

Because the plot of getting out of control. Too many twists and turns. Worse, they weren’t foreshadowed in the previous two novels or even earlier in this, the third book. The side switching and occult (in both the sense of being hidden, cryptic, and confusing and in the sense of being related to cultic magic) conspiracies that start piling up like a rush hour crash were overwhelming and left a bad taste in my mouth that spoiled some of my earlier enjoyment.

Nonetheless, the next volume will be arriving and put on hold for me at my local library later this week. I’m going to finish this d–n series.