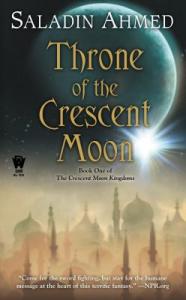 This book got pretty good press when it came out; both as a good read and for the fact that it abandoned the traditional, Western European medieval style of fantasy world for one based on the actual medieval Middle East (or, really, on the fantastical Middle East of the Arabian Nights).

As it turns out, it is one half of a good story. A bedouin-esque girl who can turn into a lion; an ascetic swordsman; an aging ghul hunter; and a husband and wife team of magus and alchemist.

But it’s missing the other half. There are ancient pyramids and evil ‘Dead Gods’ from an ancient time (something between ancient Egypt and Robert E. Howard’s orientalist fantasies of Stygia) and child murderer buried alive in the tomb of an ancient something that was, apparently, not so dead. There are some great stories behind the villains, clearly. Too bad we never ever hear those stories. Just tiny bits. But no flavor. Not background. No glimpse of their perspective or motivations (which the reader is forced to assume are ‘power and world domination’). By the standards of today’s door stopper fantasy novels, this one is not so long and an extra hundred pages would have been well worth it. As it was, the final confrontation was disappointing because I had no feel for the enemy they were fighting.