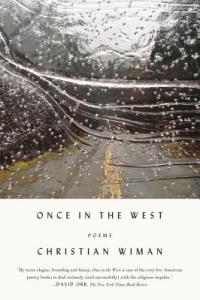 I became intrigued by Christian Wiman, the immediate former editor of Poetry, after seeing the tail end of an interview he gave to Bill Moyers. He was actually speaking mostly about a book he wrote about his faith (and the cancer that almost killed him).

I don’t actually know if any of the poems in Once in the West were written after receiving the diagnosis, but as someone who has had his own experience with a life threatening medical condition and an arduous and uncertain recovery, I certainly wore that lens over my eyes when I read them.

These poems are often religious, but less… theological… than, say Fanny Howe. I don’t think Wiman is Catholic. I could probably just google the answer, but I’m going to guess he’s that Episcopalian. He’s also funny and a little crude in his ‘conversations’ with God.

A solid portion of Wiman’s poetry here are unrhymed couplets. He’s got a prose poem or two, some ones with longer or more unusual stanzas (or no stanzas at all), but the couplets appear in half or more, I would say. Even without rhyme, it gave them a nice, old fashioned feel, like some modern day Alexander Pope.

Below is one of the poems. Not necessarily typical in its quiet, but it does show how the faint, almost but not quite rhymes, assonance, and alliterations give it a feel rather like a Pope or a Thomas Gray.

than silence.
In a dawn

lost to all,
but me,

kittens
no one now

has the heart
to kill;

so we can be alive,
together,