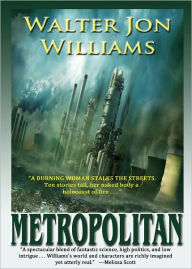 Metropolitan opens rather like a cyberpunk novel and maintains that veneer, but really, it’s a fantasy novel in disguise. ‘Magic’ is named ‘plasm’ and is generated by natural forces, but despite the science-y sounding name ‘plasm,’ and some of the science-y trappings about its use (copper grips and wires and batteries), it’s just another name for magic.

The main character, Aiah, is pretty well done. A somewhat desperate woman, whose risen as high as an ethnic minority (she is part of a darker skinned immigrant group) can in her ‘metropolis’ (the world is a single city, by the way, so place states are really city-states; also the earth is covered in a silvery shield and no one knows what is beyond, except that long ago, some ‘Ascended’ went up there and presumably locked the rest of folks in). She’s smart and reckless and you do fear for her in her desperation and recklessness. The titular Metropolitan, a sort of king in exile from another metropolis, Constantine, is decently done as a larger than life, charismatic figure. A good guy, but also willing to sacrifice a lot of lives to accomplish nebulous goals. Certainly, his appeal gets across. Also, he’s black, so credit to Williams for making the two main characters people of color and the lead a woman of color.

I enjoyed, but didn’t love it. And I probably won’t read the sequel. If you see it in a used bookstore, go for it, but that’s the most recommendation I’m giving.

On another note, I read this on my Nook app on my phone – mostly while stuck in Bangkok’s snarling, scrotum tightening traffic (I was not driving; there is a whole list of painful and possible fatal thing that I would do before driving in Bangkok, including taking career advice from a box of broken glass that has hated me since I was two and three quarters years old).