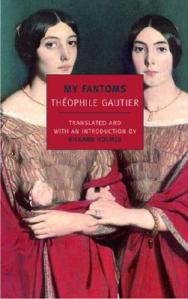 I kept reading about Gautier, but his books were never available, until suddenly they were. I’d already read a collection of his poetry, which contained a book of poetry that he’d published late in his career and that were one hundred percent awesome (!) and then some poetry that, frankly, I just had to quit reading.

I’d read one of his short stories in a collection of French Decadent fiction and these short stories (and one melancholy essay) were definitely in that vein. Like the stories of Edgar Allan Poe, but with a lot more sex and whose dread was more openly erotic. They equate sex with death not to make sex scary, but to make it all super sexy. A priest who spends his nights in a dream-like Venice with a vampire as his mistress. A visitor to Pompeii who accidentally awakens a dead and sexy pagan aristocrat whose breasts are, apparently, fantastic (really incredible; Gautier emphasizes this point repeatedly; in fact, I think it’s fair to say that Gautier is a breast man – derrieres get short shrift, but marble white, front facing curves really get his blood pumping).

The stories are reasonably fast reads and a lot of fun. Highly recommended.

The collection ends with a paean to his friend, the poet Gerard de Nerval, who committed suicide. He clearly loved Nerval (and almost certainly saw him as the superior writer and poet) and the essay elevates his life into an exotic, sexy adventure of art as life, but also one for whom life was too difficult for such a sensitive soul. He defends Nerval against claims of madness, without denying he was mad, but madness as a way of living his art.

One thought on “‘Fantoms’ By Theophile Gautier”