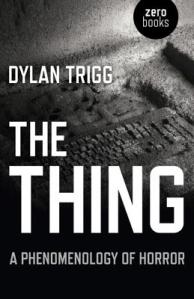 This review will be necessarily vague and brief because, honestly, I don’t remember a lot of this book. A while back, I saw a list of the best books of critical theory published in 2014. The Thing not only seemed interesting, but it also referenced my second favorite Kurt Russell movie (after the awesome super classic, Big Trouble in Little China), as well having a lot of references to the equally enjoyable and problematic works of  H.P. Lovecraft.

So, while on a plane ride to Chicago, I started burrowing into the slim volume, which I had downloaded onto my nook.

Those were some of my initial opinions. Honestly, if it weren’t so short, I wouldn’t have kept reading it on the plane at all. But I didn’t finish it on the plane and I finally got around to finishing it a couple of months later, with too little memory of the first half of the book to attempt to understand it and too little patience with what I did remember to consider starting over.