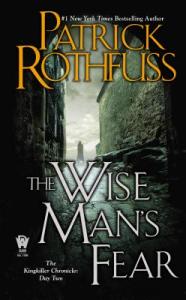 I read The Name of the Wind, I enjoyed it, so I went to the library to check out the sequel, which, except for being ridiculously long (look, people, not even Tolkien needed so many pages; you don’t need to write  door stop every freaking time), was generally better than the first book.

The main character, Kvothe, when we first hear about, is a legend who has done legendarily awesome things. Unfortunately, most of the first book was about him in school, which… I mean, that’s okay, and everything, but I really wanted to read about mythic adventures of this other, older Kvothe.

This book is still mostly about that younger Kvothe, but at least we get some hints of the future Kvothe, the super awesome magician.

But I have to go back to a point I’ve been harping on lately. All you fans of these books and of Harry Potter, did you know that someone who is a much better writer than either Rothfuss or Rowling wrote a book about the schooling and rise to greatness of a young magician, from childhood all the way to early manhood that is not only much better, but is also just a couple of hundred pages long? That’s right! You could have gotten an improved experience in only a fraction of the time and at a fraction of the cost! It’s called A Wizard of Earthsea and even if you read all the sequels (I think there are three), the total number of pages would be less than a single one of those Harry Potter free weights. And, not to belabor the point, but you would be reading books that are much, much better.

Okay, I’ll get off my high horse now.