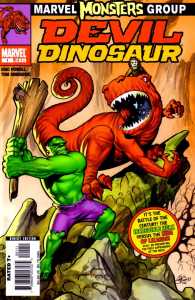 Yes, I’ve quit my regular buying of comic books, but I still make a few exceptions. In Toronto, there was a cool little comic book store/coffeehouse called the Black Canary (named after a DC Comics heroine; no superpowers, but just a tough woman).

I thought it might be a good time to look for some heretofore unpossessed (by me) Devil Dinosaur comics. I look first among the Godzilla comics (I know there was a crossover arc) and then the Devil Dinosaur box. Lo and behold, I found (for six Canadian dollars), a comic I had never read before. Super powerful aliens watch a scene from the original comics (when Devil defends Moon Boy’s people from some aggressive proto-humans) and, feeling sorry for the bad guys, give them an edge by beaming the Hulk into their midst. Hulk smashes Devil, but they think maybe they’ve made a mistake, so they give Devil extra strength and things go wrong from their, with two powerful monsters destroying the aliens’ stuff.

In the end, all goes back to the way it was.

Unlike a Devil/Spiderman crossover a few years back, this one didn’t treat Devil very respectfully. It made you realize how awesome Jack Kirby was – how in his original run, he used his artistic style to create very dynamic panels, where the action leaned forwards, towards the next page or panel, propelling things forward.

One thought on “Devil Dinosaur”