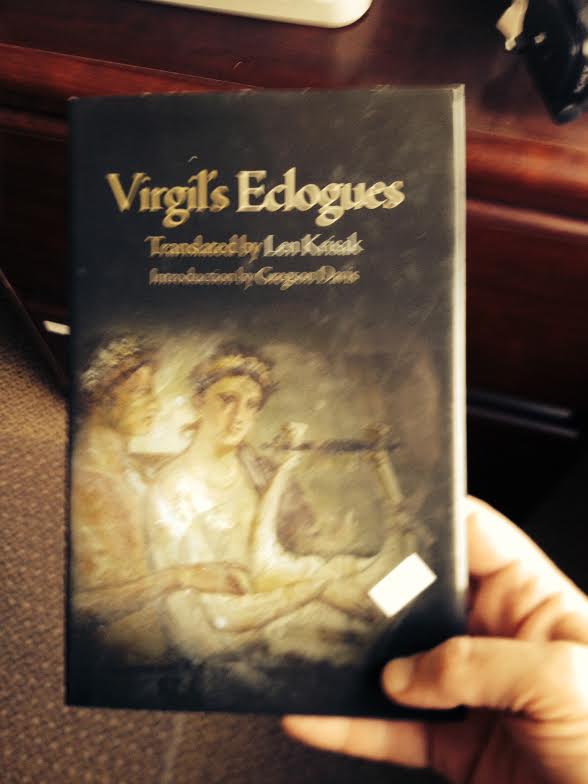 The Aeneid never did it for me. A poor man’s Latin rendition of the The Odyssey. But several years ago, I read his Georgics in one of those small, red hardbound books by Harvard University Press (the works from the Latin have red covers; from the Greek, green) that I bought at a used book sale at the National Cathedral, supporting the St Albans School (a private, Episcopal school), After reading it, I developed a new appreciation for Virgil.

The Eclogues show off his fine, earthy sense of humor and sense of the pleasures and travails of those who live off and upon the land (mainly shepherds and goat tenders). The beautiful young men and women (and nymphs) that they love break their hearts by preferring more civilized pleasures than fresh sheep’s milk and playing pan pipes in the valleys. And, too often, soldiers and war push them off the land, with the winners of civil wars being gifted the lands, which cannot help but remind one of the great English fencing off of formerly communal grazing lands by titled landlords.

But the song competitions, as rural folk face off in verse, make it all well (thankfully so, because I was switching back and forth between Virgil and Balzac and reading the terrible misfortunes that the Frenchman inflicts on his hapless characters was doing a number of my good spirits).

May Daphnus feel the love a heifer feels, when worn

With searching for her mate in groves and deepest woods,

She kneels beside a stream in verdant sedge, forlorn,

Forgetting she should leave when darkest night appears.

Let him feel love like that — and I may never care.