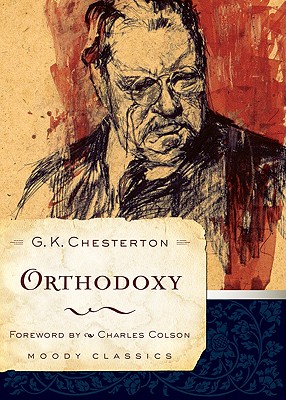 This was recommended to me by the Franciscan father who gave me my first confession. A comparatively non-dogmatic (‘dogma’ in the theological sense, not in the derogatory sense) argument and explanation for the reasonableness of the Christianity, written in a pleasantly conversational, yet aggressive tone.

My mother is the big mystery fan, so maybe I’ll ask her if she’s read any of Chesterton’s ‘Father Brown’ mystery stories.

Early on, there was a great bit about poets that I posted a while back – check it out here.

What I loved most is how liberal Chesterton is – and liberal in a very modern, progressive sense. There is a great bit about original sin urging us to constantly strive and engage in and support very progressive policies for the poor. Honestly, I don’t know what this book isn’t as famous for being a liberal polemic as it is for being a Christian apologetic.

However, I do wonder whether the priest knew that Chesterton was still Anglican when he wrote this book? Not that it matters. By ‘orthodoxy,’ he meant adhering to the Apostles’ Creed, which is something that the Anglican, Episcopal, Catholic, and no doubt many other churches share.

One thought on “‘Orthodoxy’ By G.K. Chesterton”