I hope the estate got a good deal. Count me on the side that felt that Jack Kirby got a bum deal for all his work for Marvel (and also DC Comics, but especially Marvel). He created or creatively reinvented some of the most iconic characters (Spiderman, Captain America, Iron Man and more; his early runs of Captain America and especially the Fantastic Four are awesome and, of course, he was responsible for my all time favorite comic – Devil Dinosaur!) and his action oriented style is still the gold standard.

The image is from Devil Dinosaur (a sadly short-lived comic, whose titular, flame colored tyrannosaurus rex is only occasionally trotted out these days, as he was for a recent, two issue, Spiderman crossover). The style is classic Kirby, who would do this big, horizontal panels, densely packed and giving it real ‘oomph’ and velocity by placing the hero at that angle, leaning right (forward, towards the next page), often almost parallel to the horizontal floor of the frame. 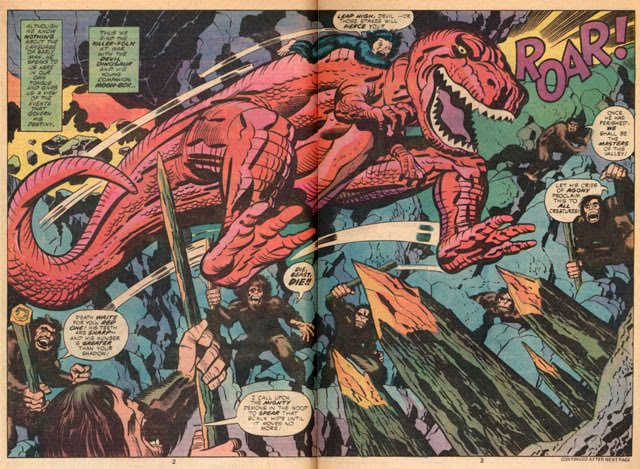