This lovely book (it’s amazing to the touch; one of those books that feels preternaturally cool and comforting to the skin), despite it’s broad sounding title, is focused heavily, indeed, almost exclusively, on essays about poetry from the first two thirds of the nineteenth century.

It opens with Wordworth’s introduction to his Lyrical Ballads, which was an essay entitled Poetry and Poetic Diction. Diction, in truth, gets short shrift. It is mostly about the use of common language, the language of speech (particularly rural speech) in poetry. Wordsworth comes very close to writing that the only significant difference between poetry and prose is meter. He seems to be arguing with poets of the previous two centuries (Alexander Pope and Ben Jonson gets mention), who wrote in radically different styles and for radically different reasons. The novel had not yet taken off, so poetry, rather than prose, was a more general means of written communication. Yes, Wordsworth writes more plainly, closer to plain speech, but he think he misjudges the ways he still elevates his language, and to compare his pastoral work to the urban wit of his predecessors is to compare apples and oranges (though, if Wordsworth is the orange, I don’t hesitate to say: I prefer oranges to apples).

The invaluable works of our elder writers, I had almost said the works of Shakespeare and Milton, are driven into neglect by frantic novels, sickly and stupid German Tragedies, and deluges of idle and extravagant stories in verse. -When I think upon this degrading thirst after outrageous stimulation…

Cranky old men complaining about what the youth of today waste their time on is nothing new. But keep in mind, that many of those works about which he complains are now considered classics (because, c’mon, tell me isn’t moaning about the insidious influence of garbage like, say… Goethe’s The Sorrows of Young Werther?).

Immediately following is an essay by Samuel Taylor Coleridge challenging Wordsworth. He begins politely, expressing his love of the elder poet’s work and general agreement with much of is written, but…

But what? For me, it seems little more than Coleridge standing up for more dreamy, allusion-heavy writing in the face of Wordsworth’s great pastorals. I think it’s also an oedipal challenge. I recall reading, though I am too lazy right now to go to google and doublecheck, that Coleridge felt that Wordsworth was slightly dismissive of his once worshipful younger colleague. He is putting his decadent and diseased (in a good way), inward facing romanticism, against Wordsworth’s conservative (in the sense of conserving) pastoral romanticism.

Charles Lamb, a writer I started reading over the winter (mainly some of his letters), wrote an essay that was included that it is just strange. Apparently, it’s just no good trying to act out Shakespeare. Certainly, actors should get no credit for doing it well. You see, a Shakespeare tragedy is just so awesome as it is, that trying to actually perform it can only lessen its greatness. Yeah. Whatever.

The wonderfully hallucinatory William Blake wrote an essay on Chaucer’s Canterbury Tales where he… what? I don’t even know. Explains that Chaucer was really good at writing about people. Kind of a proto-psychologist. My take away? That the drop off between Wordsworth and Coleridge’s essay writing skills and those of Lamb and Blake is pretty steep.

And then… oh my gosh. Shelley’s Defence of Poetry. I had never read this before and all I can say is, what the heck have I been doing with myself? Freaking amazing. Really. Amazing. Outstanding. Mindblowing. Prescient. Good stuff, all around.

I learned that the famous line, ‘Poets are the unacknowledged legislators of the world,’ is actually the closing sentence of this famous essay. But it’s the stuff new to me in it that blows me away.

He writes that metaphorical distance from the highest forms of poetry leads to ‘social corruption.’ Obviously, this can be read simply as some hyperbolic argument for the uplifting value of art, but after recent studies showing that reading fiction actually makes people kinder, more forgiving, and more compassionate.

Also, listen to this: ‘The rich have become richer and the poor have become poorer.’ This, he says, is the major symptom of the supplanting of a poetic society with a mechanistic one.

William Hazlitt has been on my ‘to read’ list for a while, but My First Acquaintance with Poets is a strange bird and I can’t quite figure out what its purpose is. Basically it’s about his relationship with Samuel Taylor Coleridge (first met when he was preacher) and, to a much lesser extent, William Wordsworth. It sounds like Wordsworth only barely noticed him so… okay. And Coleridge sounds like someone the youthful Hazlitt idolized, but you can’t shake the feeling that he doesn’t really like Coleridge’s poetry so, why write about him? He seemed to like his sermons and religious conversation, but the whole effect is of a bit name dropping intended to show that the names being dropped belonged to people who maybe weren’t so cool, after all. Whatever. It’s Colergide, dude. He was cool. Accept it. 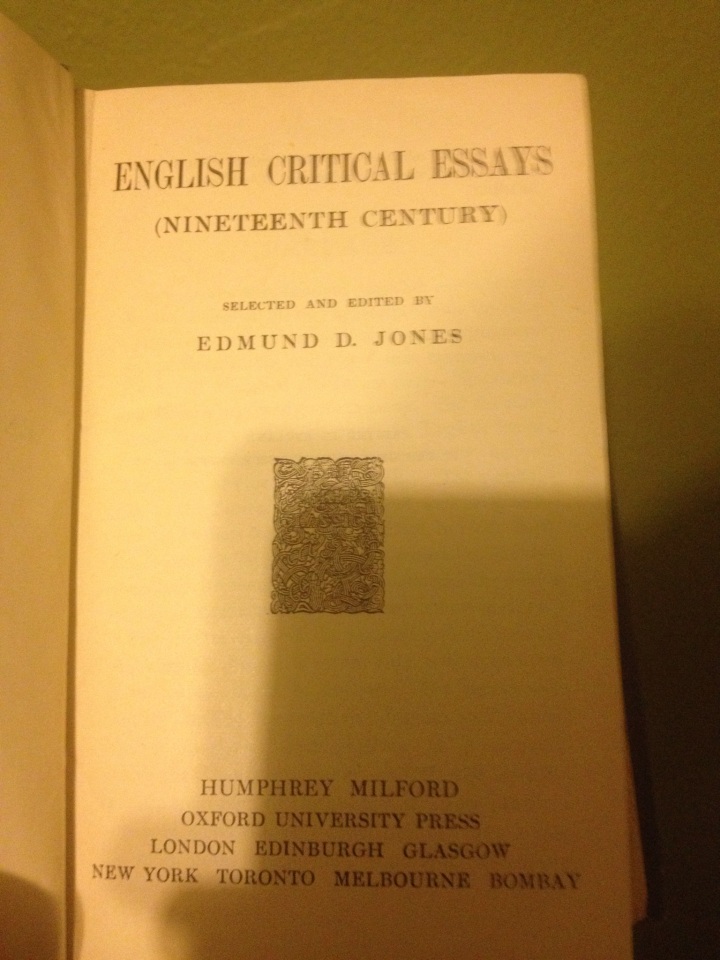