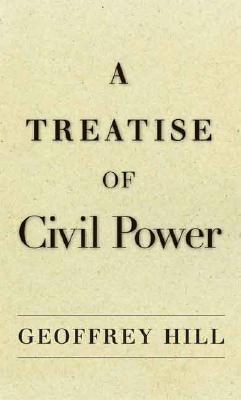 I saw Hill read once and he was an engaging and erudite (without being obfuscatory) reader, but at the time, I chose a to buy a collection by one of the less known poets in attendance, but when I was browsing Politics & Prose while waiting out some traffic, I saw Hill’s A Treatise of Civil Power on sale and couldn’t resist.

It’s a damn melancholy book. I keep on thinking that it’s referring to some Latin treatise by a Cicero or Tacitus type of character, but it’s actually a reference to Milton and he draws heavily on seventeenth century English history and a Miltonic style (and very Miltonic enjambments). In writing poems about centuries old quarrels and the (usually failed) efforts to resolve them peacefully and successfully, it’s difficult not to take away a deep pessimism from the poems. Without being terribly dense, the poems also manage to have a strange feeling of density. Maybe it’s the archaic style (I’m also reading some Ben Jonson and while his poems, with their irregular spelling and very different modes of writing than our current ones, are more difficult to read, their is an airiness to them that you don’t find three quarters of a century later).

He also wrote an entire poem in memoriam of the British philosopher, Gillian Rose. I had to look her up. Apparently, they had some kind of quarrel and he wrote (fondly? sadly? regretfully) of her prickliness and their disagreements (whatever they were). So even when he moves forward in time, it’s still powerfully melancholy. And melancholy is the right word. Not sad. Something with a cavernous, time-spanning and more baritone to it than ‘sad.’ Something like ‘melancholy’ (though I don’t remember that he ever referenced Burton’s book/poem/treatise sui generis, Anatomy of Melancholy).