Somewhere, on some blog, written by some person – I saw a recommendation (of sorts) for Arthur C. Clarke’s Dolphin Island. I think I was googling for recommendations for science fiction books to read.

So when I saw Dolphin Island on the shelves of Royal Oak Bookshop, I picked it up (it was just $1 – the prices at that place are fantastically generous).

The book seems pretty far distant what I remember on that blog. I seem to remember it being described as a bit more apocalyptic. 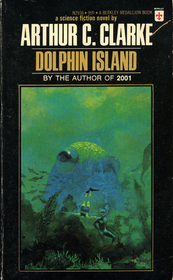 Instead, it’s a gentle novel for young adults.

Which is fine. I gave it to my mother to give to a twelve year old of her acquaintance who has developed an interest in science fiction.

The really big things in this novel are picked and quickly dropped, unresolved. For example, the crashed alien space ship that’s leaking radiation and whose location is only known to the ancient storyteller caste of dolphin society. The effort broker some kind of truce between killer whales and their occasional prey, dolphins. Call me crazy, but when these things are brought up in novel (particularly a fairly straightforward one – I’ll admit to having slightly different standards for Thomas Pynchon writings), I sort of expect some kind of, well, anything. A resolution, maybe? Some kind of answer (were they nice aliens?)?